Adobe has introduced (v1.0.x) Adobe XD CC, Adobe claims you can turn your best ideas into beautiful experiences — fast. Let’s give it a try.

If you don’t already have Adobe CC installed you can download a trial here. If you are wanting to install on Windows you will need Windows 10 (Anniversary Edition). Adobe has minimum system requirements listed here. 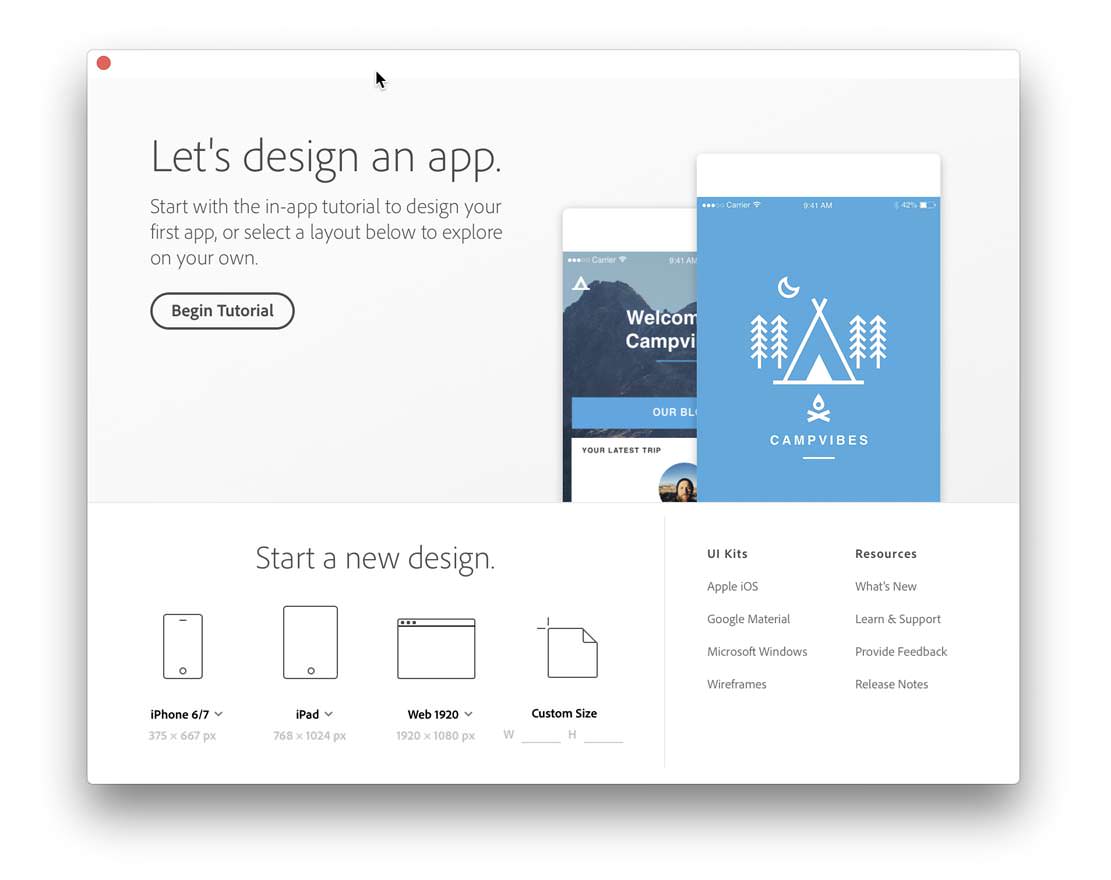 After you start an iOS project you will be looking for controls to add to your prototype. Adobe XD CC offers where you can download UI Kits direct from vendors (a shame when you are used to XCode or Visual Studio having controls preloaded).

You will need to download the Apple UI Design Resources for Design XD from the Apple site (use the menu in the screenshot below or click here), they do not come with Adobe XD CC.

Download the iOS 11 UI resources for Adobe XD CC from the Apple site. 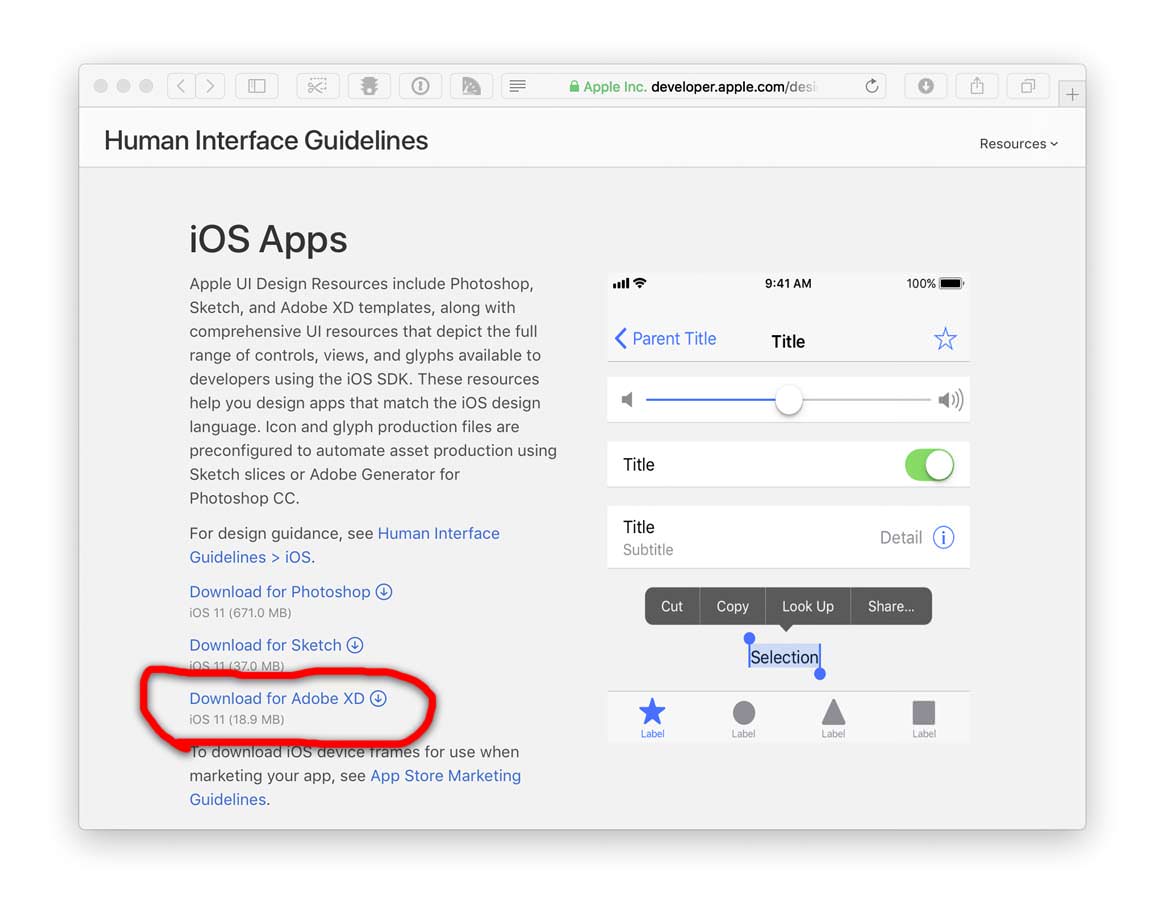 You can now extract the iOS resource files from Apple for use in Adobe XD projects.  When iOS 12 and Android 9 comes out you can download new UI Kits.

Once you extract the files from the zip file, run the ./iOS-11-AdobeXD/Fonts/San Francisco Pro.pkg file to install iOS 11 font on yoir system.

I could not find a way to install the UI Kits permanently into Adobe XD CC (Searching revealed you need to open templates (as a separate process or open file in Adobe XD (double-click on the file)) and paste elements into your project). This seems clunky.

Why use Adobe XD

You can use Adobe XD to prototype interfaces around the common activities, a person may perform while using the apps you are prototyping. You can design an app’s onboarding, intro or user screens before actually developing the app. 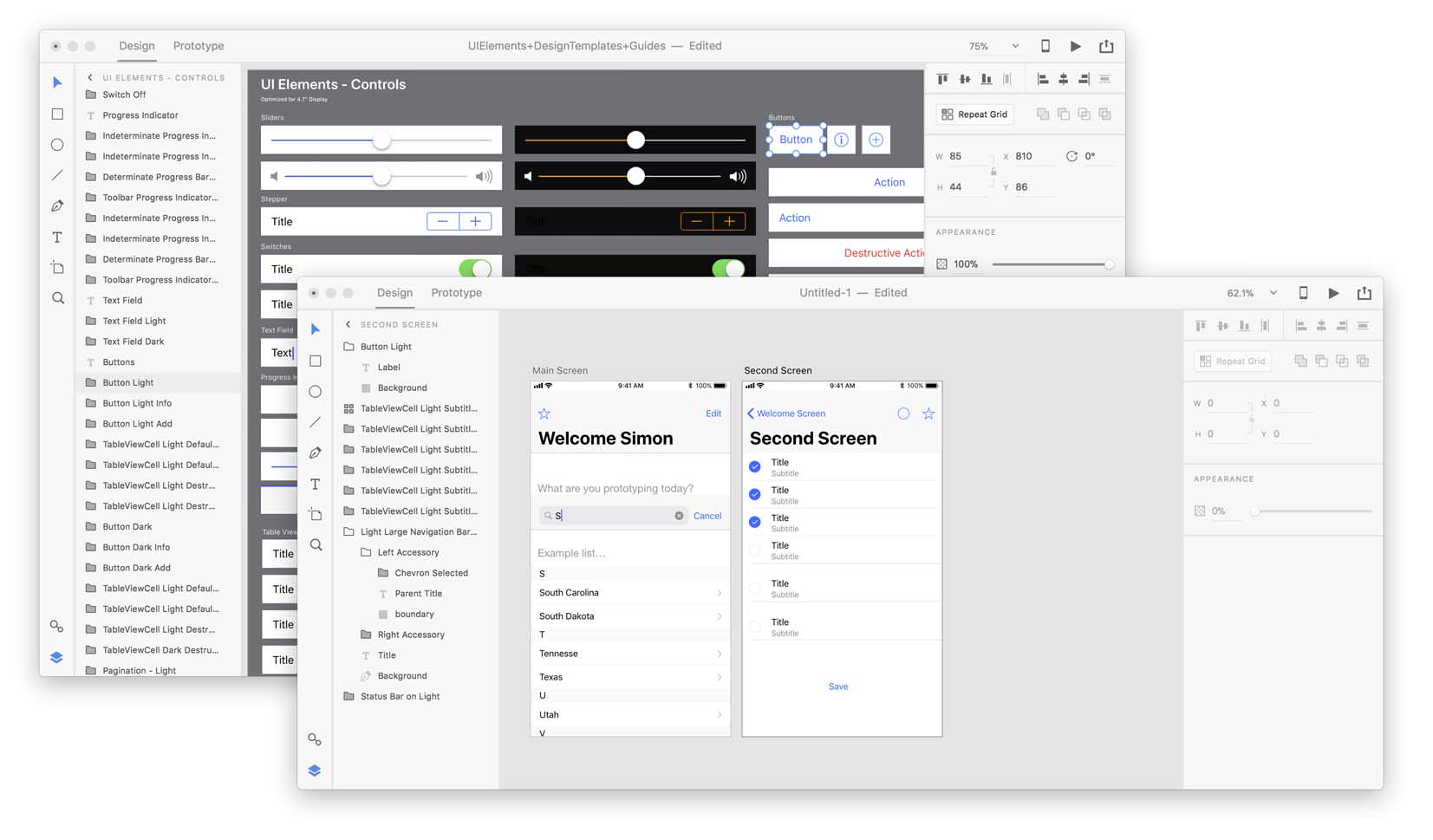 TIP: Apple has a great site explaining how you can design and deliver apps (open the Apple Human Interfaces – iOS Design Themes page here). Apple also has assets and guidelines available for marketing your apps here.

To make buttons interactive you will need to click the Prototype tab and then drag the blue tabs to the right of interactive elements to the target screens. 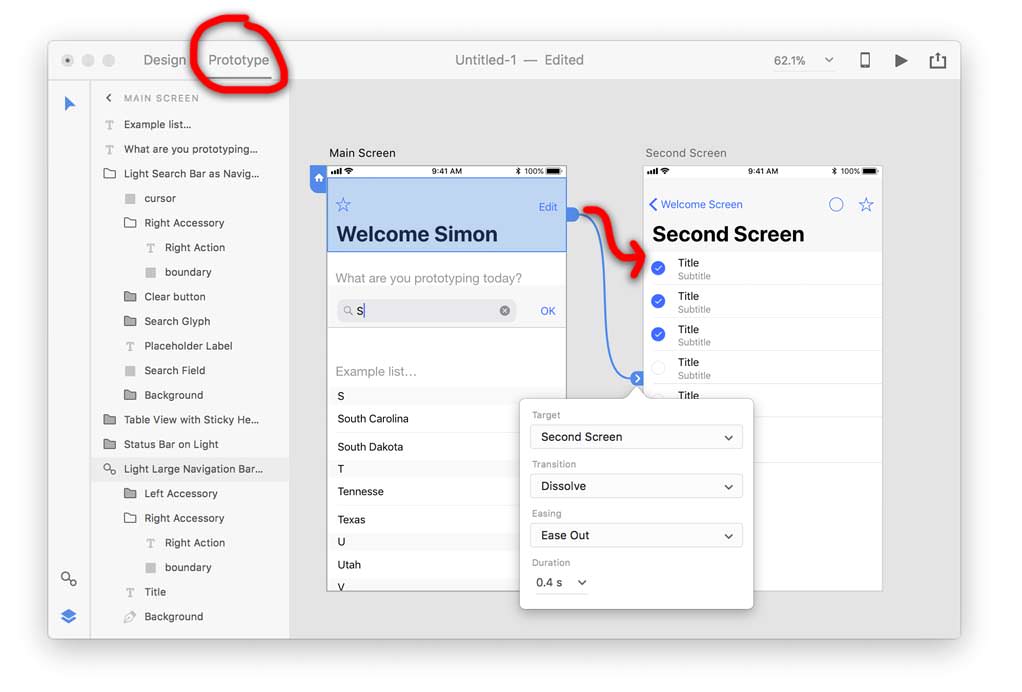 You can learn more on making interactive prototypes here.

Tip: Don’t forget to add interactive links back to the home screen.

You can then press the play button to preview the app prototype simulated in software. 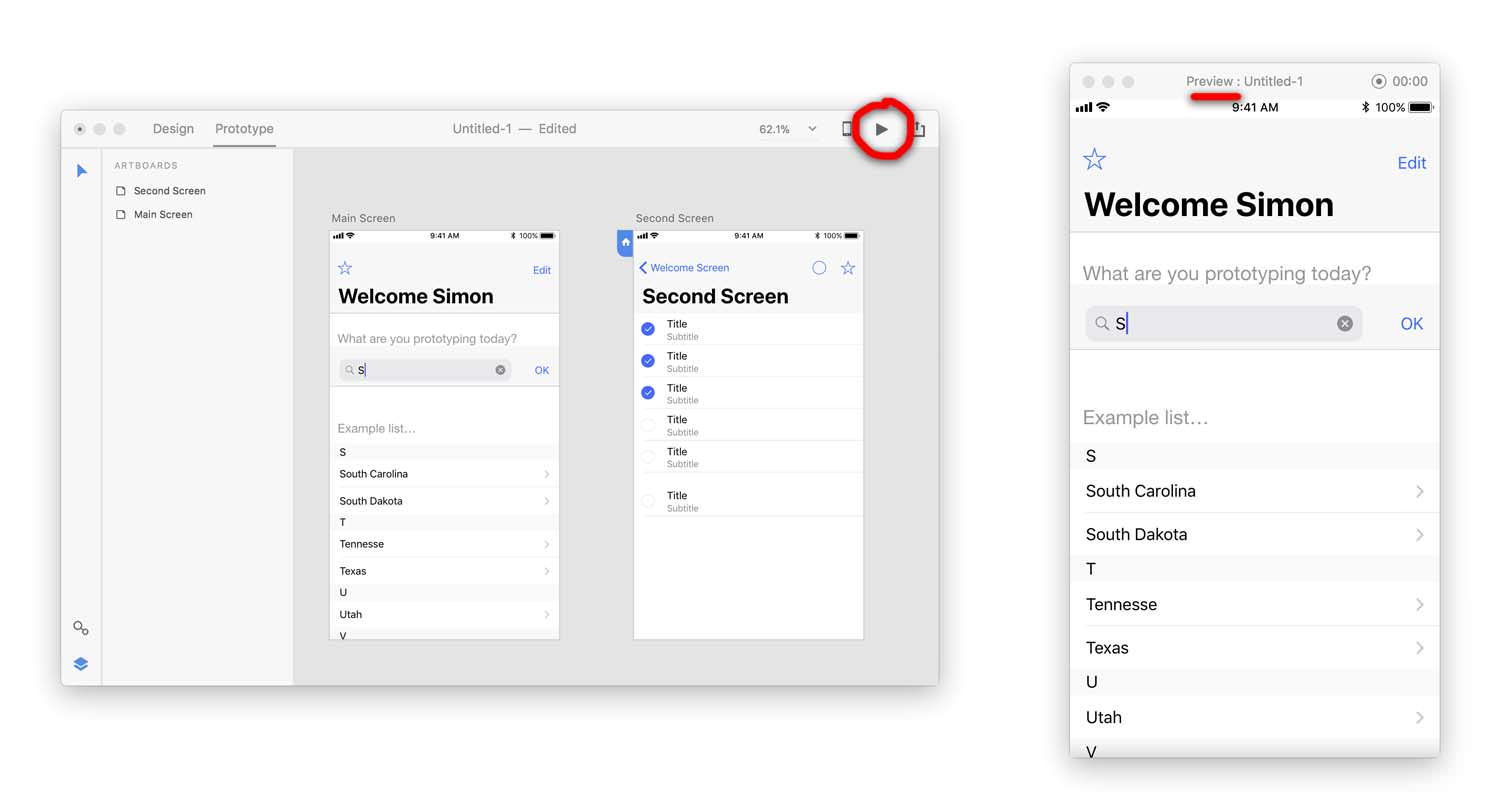 You can now save and export your prototype app project to PNG, PDF, Web or other formats to others to send for review.

I was able to install Adobe XD app onto iOS, log in with my Adobe ID and the prototype popped up when I connected my iOS device to my Mac. More info here.

I was able to install the Android Adobe XD app and also sync a prototype app (Android was a bit slower to find the project but still the same process as iOS). 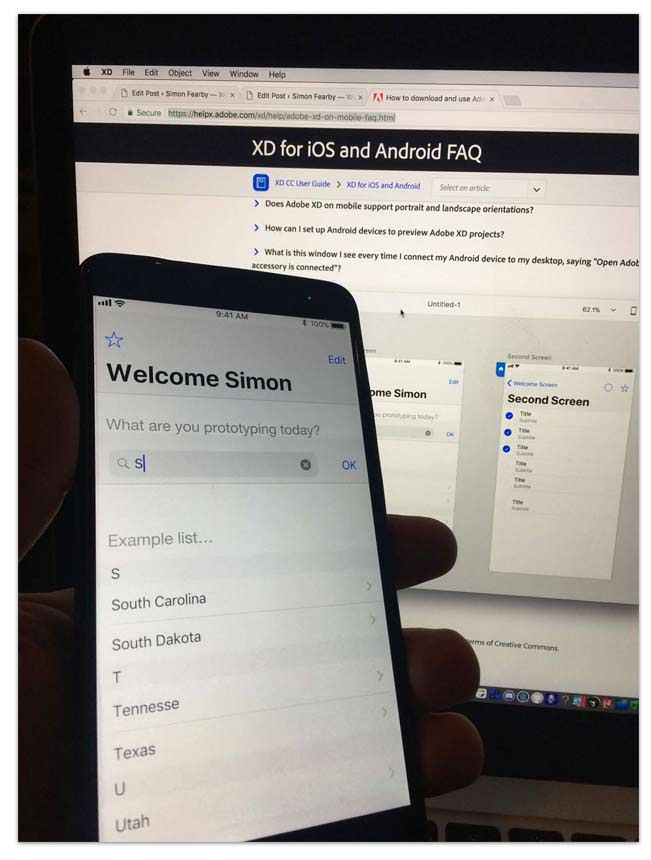 On the positive side, Adobe is openly allowing people to suggest and vote on features here https://adobexd.uservoice.com

But with Adobe XD you have the flexibility of having a design and prototyping product in one package with new monthly features.